A solar power plant converts the light energy from the sun into electricity. This electricity is supplied to our homes or offices and the excess power can be stored in battery banks or exported to the grid. 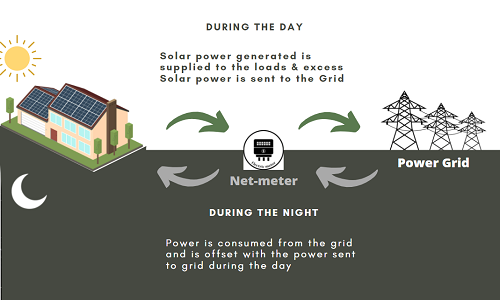 A Net-metering system is used to optimise the use of solar power generated. The power generated by the solar panels installed on the rooftop of premises is primarily used for captive consumption of the customer.

Any excess power generated by the system is exported to the grid and is offset at the end of the month with the power consumed from the grid.

A bi-directional meter is installed to record the number of units sent to or utilized from the grid, and the customer is charged only for the net units consumed.

This system is efficiently designed to work even during a power failure. When there is a power failure, the diesel generator will provide the reference voltage required to initiate solar power generation which is otherwise provided by the grid.

A smart controller intelligently prioritizes the supply of solar power for the loads hence reducing the consumption of diesel.

This system is designed to intelligently integrate multiple power sources - Solar, Grid, Battery & Genset to supply to the loads.

The solar power generated charges the batteries and caters to the load during the daytime During a power failure, the battery system ensures uninterrupted power supply to the loads.

This system not only provides a back up but also gives the added benefit of reduced electricity bills.